In the Tatra Mountains of Poland, there are 12 adults and four children, three cows and three dogs, living an intentional community life on an ecovillage farm centered on spiritual practice.

In the Tatra Mountains of Poland, there are 12 adults and four children, three cows and three dogs, living an intentional community life on an ecovillage farm centered on spiritual practice. In Slovenia, communal life at Sustainability Park Istra attracts international volunteers to support Istria residents.

They’re just two examples of new choices people across the planet are making about how to live in a rapidly changing world. The Fellowship for International Community currently lists 1,547 projects across the globe, from rural communes to urban co-housing communities to ecovillage tourist destinations.

Yet what if the organizing principles behind these selective and intentional models were applied on a wider scale to encourage community resilience and a more accessible sustainable lifestyle? And what if the whole idea of ecovillages, and a shared simplicity within a web of climate-friendly connections, was as old as it is new? 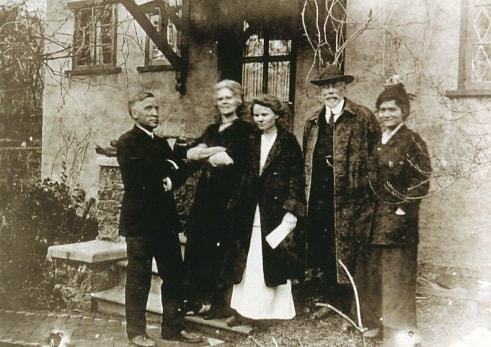 That’s the case in Arden, an intentional community in the United States that’s more than 100 years old. Unlike smaller co-housing models or remote farms, the 1,000 Arden residents thrive in an entire village oasis embedded within the busy urban coastal corridor between Philadelphia and Baltimore. That’s because it was there first: Arden began as an arts colony in 1900, hence the Shakespearean name, and was placed on the National Register of Historic Places, simply for its ideas, in 1973. It is now a cluster of three unified towns.

Life in Arden is still rooted in its original idyllic vision. Half of its 162 acres are committed to old growth forests that buffer it from suburban encroachment, paths and trails that have endured for decades, neighbors that face across open greens, and the gardens that it began with. Land-use policies in Arden are based on Ebenezer Howard’s Garden Cities movement launched in 1898, but also on Henry George’s late-19th century vision for land reform based on single tax. For this reason, all Arden land is held in a communal trust. Anyone can own a house or rent a cottage there, but a house comes with a land lease.

Ardenites have private lives but are always tied by communal economic bonds. Those bonds are extended in the foundational principles of the Arts and Crafts Movement championed by  Wiiliam Morris, and the appreciation of nature and artisanal work on which Arden was built.

It remains an enclave of poets, sculptors, musicians and the theater community today, complete with an open-air stage tucked between houses, an amphitheater at the village art center, a labyrinth walk, volunteer library, museum and more. Yet Arden also is home to lawyers, journalists and others seeing a different path.

Arden practices town-hall government – any resident can introduce a measure – and shares weekly communal meals. The Forest Committee works to protect Arden’s land and water; a Transformational Committee is building on a century of sustainability values to explore ideas like a micro-grid to serve the entire village with renewable energy, artisans’ apprenticeship programs, and support for aging in place.

“In Arden, unattended kids roam the roads and forests freely, a fact that wouldn’t have seemed unusual in my 1970s childhood but can be jarring to outsiders today,” writes Jesse Walker in a 2017 Reason magazine piece on the “radical political experiment” that is Arden. Yet his work is unflinching when it comes to the early failures, the challenge and conflict that come with balancing individual freedoms within a communal culture, or how the Arden enclave protects its legal structure within the wider world.

Alas, it is not, after all, utopia. But as the world seeks to reorient itself toward sustainable future goals, it’s worth looking at the past – and at Arden, an intentional community tucked just off the interstate that’s been building on that future since 1900.

The competition is on for Eastern Europe’s nuclear power market

Skateboarding is fun. It can also be ecofriendly

Truly sustainable cities are all about balance

Air quality regulation has ‘saved 1.5 billion birds’ in the US

Africans feel the heat in a warming world

Sustainability Times November 17, 2020
Scroll to top
Skip to content
We use cookies to ensure that we give you the best experience on our website. If you continue to use this site we will assume that you are happy with it.Ok