Two experts offer a practical way for us to decarbonize fast on a global scale to avert a climate catastrophe.

In their new book A Bright Future: How Some Countries Have Solved Climate Change and the Rest Can Follow, Prof. Joshua S. Goldstein, an American political scientist and bestselling author, and Staffan A. Qvist, a Swedish engineer and green energy consultant, lay out a practical and affordable way for the planet’s nations to decarbonize fast on a global scale in order to avert a climate catastrophe triggered by the burning of fossil fuels. They recommend greatly expanding nuclear power to replace coal-fired plants worldwide in meeting growing global energy needs.

Steven Pinker, a prominent cognitive psychologist and science author, has called A Bright Future “the most important book about climate change since An Inconvenient Truth.” He elucidated: “Few books can credibly claim to offer a way to save the world, but this one does.” A reviewer in the Financial Times has provisionally agreed with Pinker. “That is a bold assertion, but by the time I had finished the book, I was half-convinced [Pinker] was right,” the reviewer writes.

ST: What are the greatest challenges globally as we seek to transition to low-carbon energy sources?

Joshua S. Goldstein: Climate scientists have given us the mandate to decarbonize the world by 2050. To do that means not only powering today’s grid with carbon-free sources but also accommodating rising energy usage in large, developing countries such as India and Indonesia. Besides, we’ll need to add another billion people who now lack electricity access. We’ll also need to electrify industry, the heating systems of buildings, and transportation (through electric-powered production of carbon-neutral fuels). Then we’ll need to sequester carbon from the atmosphere, which will also require using a lot of electricity. That’s a massive amount of clean electricity that must be added in just 30 years.

ST: You’ve made the case that in order for large-scale decarbonization efforts to be successful, nuclear power will need to be a larger part of future energy plans. Could you please explain?

JSG: Nuclear power can scale up very rapidly because it’s so concentrated – tens of thousands of times more electricity per pound of fuel. And it’s a proven way: France and Sweden decarbonized their grids in less than two decades by building nuclear power. Nuclear power can directly replace coal because it generates power around the clock, around the year, in any weather. A serious plan to decarbonize the whole world in 30 years while letting energy use grow simply can’t add up without a large amount of nuclear power.

ST: Many experts are pinning their hopes on renewables. Other experts stress that these weather-dependent and intermittent sources of energy would not suffice in and of themselves if we are to phase out fossil fuels entirely. What are your views?

JSG: The leading renewable worldwide is hydroelectricity, which is a great source from an energy perspective, although it damages local ecosystems. However, it’s not scalable because most of the best sites have already been dammed. At small scales hydroelectricity can balance out the variable production of wind and solar, but this would not be available with a massive expansion of wind and solar. That leaves batteries to fill the gap when the wind doesn’t blow and the sun doesn’t shine. But there is no reliable prospect in the next decade or two – the time when we will need to decarbonize massively – of a battery so efficient and cheap that it can power whole cities for days or weeks at a time.

I live in New England and the solar cells on my roof drop to almost no production in the winter and of course to zero every night. With a backbone of “anytime” energy production, which is currently carbon-emitting natural gas but could be nuclear power, you can add wind and solar to the grid pretty easily. But the idea of powering the grid on those sources alone is just completely impractical. My worry is that wind and solar are so politically popular, and becoming so affordable during their times of production, that the world will spend a decade just adding more and more of them, only to discover the limitations and wish we had that decade back to develop a more practical overall energy system.

ST: In some industrialized nations nuclear power remains unpopular with policymakers. Germany, for instance, has just announced a plan to shut down all coal-fired plants within two decades, yet the country’s government also wants to shut down all nuclear plants within a few years. Why do you think this aversion to nuclear energy persists?

JSG: The direct answer, I think, is that anti-nuclear ideology in Germany drew strength first from the association of nuclear power with nuclear weapons – Germany was on the frontline during the Cold War – and then from the inclusion of the Green Party in the government coalition. After the Fukushima accident in 2011, the Energiewende (energy transition) policy went into high gear, with the closing of perfectly good nuclear plants and the large-scale building of renewables.

This unfortunately just replaced one clean source with another and did little to stop coal-burning. As a result, German carbon emissions have barely decreased, and the decade of massive effort, with broad political support, technical expertise and money, has failed to decarbonize in any meaningful way. Germany’s approach is in striking contrast with Sweden and France’s success.

Shutting down coal plants in two decades won’t be fast enough, even if Germany does manage to accomplish it. And Germany is planning to do so by merely replacing coal with natural gas, just as the United States has been doing. Right now Germany is building another large-scale gas pipeline from Russia, and Russia’s natural gas infrastructure leaks a lot of methane into the atmosphere where it’s a potent greenhouse gas. Germany’s words about decarbonizing and its actual record are dramatically different. It’s not a model the world should look to.

ST: You’ve stressed that fears about the dangers of nuclear power are exaggerated. Could you please explain?

JSG: Nuclear power triggers fear for several psychological reasons. People associate it with nuclear weapons (not the same; power plant can’t blow up like a nuclear bomb). The Fukushima accident seems to have been cross-wired in people’s brains with an actual epic natural disaster that killed almost 20,000 people, even though none of those deaths actually resulted from the nuclear plant accident. [Locals perished in a massive earthquake and a subsequent tsunami; editor.]

People also fear contamination by trace amounts of dangerous substances, in this case radiation, ignoring the fact that radiation is around us all the time and nuclear power has almost never increased it to unsafe levels anywhere. There is a tendency to overexaggerate dramatic risks like a nuclear accident and underestimate routine ones like cancer and emphysema deaths from coal-burning. If you step back and look objectively, coal remains the leading source of electric generation worldwide and kills hundreds of thousands of people every year, while nuclear power has had only a few attention-getting accidents in sixty years.

The only fatal nuclear accident was Chernobyl, which might have led to several thousand eventual cancer deaths – but that’s roughly the number killed by coal worldwide on an average day. The radiation that escaped at Fukushima can be measured in small amounts but it never rose above established safety levels for human health. There are also fears about spent nuclear fuel. Spent fuel is very small scale, is safe and stable in interim storage (concrete casks and pools of water), and would pose little risk even if some leaked out far in the future.

ST: What do you think can and should be done in order for nuclear power to become more prominent as a low-carbon energy source?

JSG: First, China is the leading source of carbon emissions, larger than the U.S. and Europe combined. China can and should immediately pick one or two reactor designs and build them by the hundreds to replace coal on its grid. This could be done in 15-20 years and would reduce global carbon emissions by more than 10%, which has never been done until now.

Second, large developing countries with rapidly growing energy needs, such as India and Indonesia, need to develop a nuclear-powered path for that growth instead of coal, which is their current choice. For the U.S. and Europe, current reactor builds have become way too expensive, and perhaps the best shot to quickly decarbonize is to accelerate the development of fourth-generation reactors being designed by dozens of startups. These could be factory- or shipyard-built in large enough numbers to bring down costs, and they could also be exported to other countries to replace fossil fuels worldwide.

Finally, cheap, clean electricity from nuclear power will allow the replacement of fossil fuels in transportation, industry, and building heating, either through direct electrification or the synthesis of carbon-neutral substitute fuels. These sectors generate twice the carbon emissions of the grid worldwide, so this piece is critical. 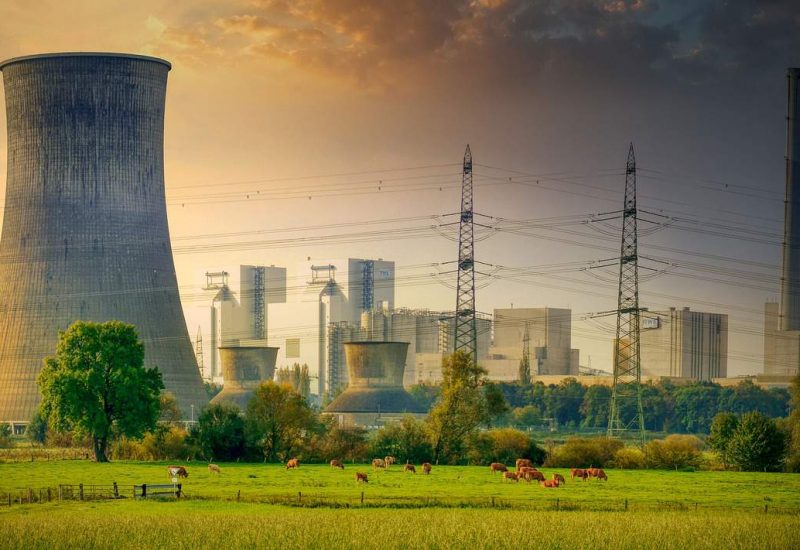